25 hours on a bus from London to Switzerland

“Sorry sir, I’ll have to cancel your ticket”

We planned to start our cycle tour in Bern, Switzerland, but we realised it would be better to buy our bicycles in London. That meant we had to get ourselves and our bikes from London to Bern. The cheapest option (by far) was the bus.

We booked tickets with Flix Bus, the bike-friendly bus line. On the day of departure we telephoned to book in our bicycles as ‘special luggage’ as per their instructions. The guy we spoke with, who described himself as ‘not the brightest bulb in the box’ said we couldn’t take our bikes on the bus because the second leg was too full. He could actually book the bikes on the first leg, but he wouldn’t do it because of the second leg.

The only option, he told us, was to cancel our reservation.

All our plans involved getting to Bern and cycling away from there. Being stranded in London was not an option, so we asked him not to cancel our tickets. We decided to just turn up to the bus station and try our luck.

It was stupidly stressful packing up our bikes and riding off to the bus having no idea if we would be allowed on or not. We didn’t really know what we would do if we were turned away. As it turned out, the driver was up the front checking tickets and all the passengers were loading their own luggage. We popped the bikes in and boarded the bus with a thrill of elation. We were on our way!

Our problems weren’t over though. We were delayed at the dock in Dover for 2 hours, so we missed our connecting bus out of Paris. The company put us onto a bus to Lyon, then another from there to Bern. This added an extra 7 hours onto our trip.

We had to pay €18 to load the bikes on the second leg but the third leg was not a problem. The driver was just  happy with how we loaded the bikes.

So we successfully got to Bern, put our bikes together and cycled away. We could hardly believe it.

How to package your bike for transport on a bus

We thought we needed to take the bikes apart and put them in boxes, but the marvellous lady from the shop where we bought my bike (ReCycling) said we could just wrap them in cling film and they’d be perfectly acceptable.

This turned out to be a genius method. We removed the front wheel and the seat but apart from that the bikes remained intact. This made things way easier at both ends since we weren’t carrying a lot of tools.

We used one roll of cling wrap for each bike. From memory, they were 30m rolls.

We got a lump of discarded bubble wrap from a nearby shop owner. Before we started wrapping we placed that over the rear wheel gear mechanism to offer some extra protection.

Then we had one person hold the bicycle while the other ran around in circles with the cling film. Sometimes the wrapper got to sit still while the holder spun the bicycle.

It made a really nice, compact package. Most importantly, it looked clean and inoffensive. It clearly wasn’t going to get grease all over everyone else’s luggage.

We think that was a major contributor to getting the bikes onto each leg of the trip. They looked innocent and small. If they had been in boxes they would have been much bigger. 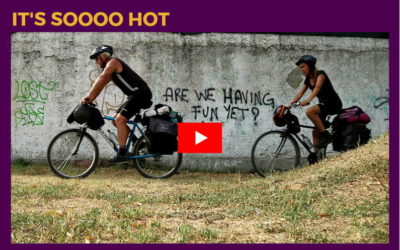 Don’t cycle through Italy in August, it’s too damn hot!

Italy is a stunning country full of history and wonders, but it’s so hot in August.

This fruit smells like vomit and doesn’t taste much better

When you eat a langsat, on the other hand, it’s like you’ve died and gone to heaven.

Singapore’s National Day is a spectacular celebration – and it never rains because they force it to rain in the days leading up to the event!

Why visit the zoo when you can see monkeys in the wild?